This Rabbit Rillettes is a delicious recipe that turns a wild rabbit into a traditional country-style pate or terrine that uses pork fat to preserve. 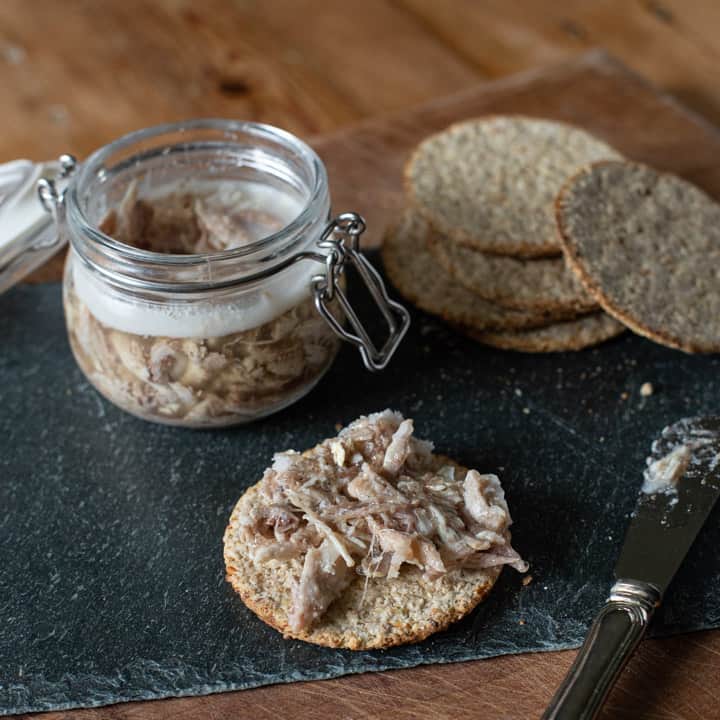 Rillettes is a fancy name for what my Grandmother would likely have called ‘potted meat’.

It’s very similar in texture to a coarse pate. With tender shreds of cooked meat suspended in a rich, creamy jelly.

The main differences between a pate and a traditional rillettes recipe is that the latter is usually dairy-free.

Most rillettes recipes call for rendered animal fat for the richness. Whereas pates are most often made with butter or cream.

I’m using pork fat, but I’ve heard of people using goose or duck fat in a rillettes recipe too. 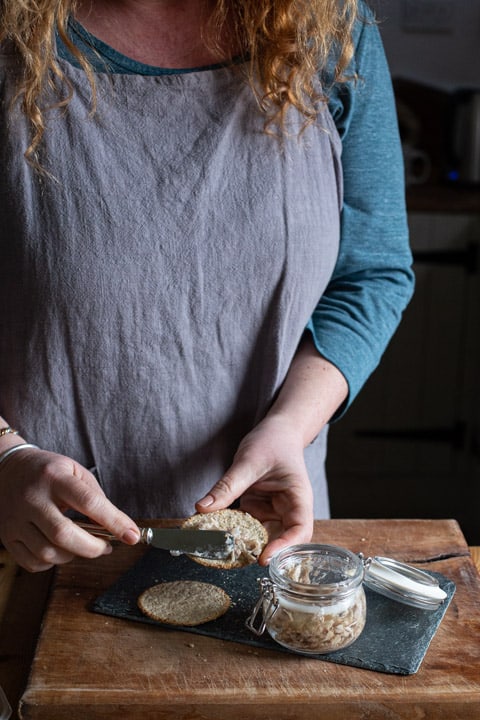 Secondly, pates are usually made with organ meats (such as liver), whilst rillettes recipes tend to call for shredded muscle meat.

The fat is there for more than just taste though.

In days before fridges & freezers were in every kitchen, the layer of fat on the top would have helped preserve the meat.

The fat acts as a barrier between the meat and the air, thereby stopping the meat from spoiling.

It’s worth noting at this point that rabbit meat is extremely lean.

For this recipe to work you will definitely need to add the fat from another animal as rabbits don’t carry enough to flavour and preserve your rillettes.

If you’ve ever heard the expression “at it like bunnies” you’ll have some idea of how quickly rabbits procreate.

Following a quick Google, I discover that a female bunny has an average of 6 babies per litter. And can have one litter every single month. Just. Wow.

And as most country folk will know, rabbits are a much-underused protein source.

They are delicate in flavour, tasting quite similar to chicken.

They are free from air miles, factory farming, plastic waste, and so many other negative side effects to the food we put on our plates. 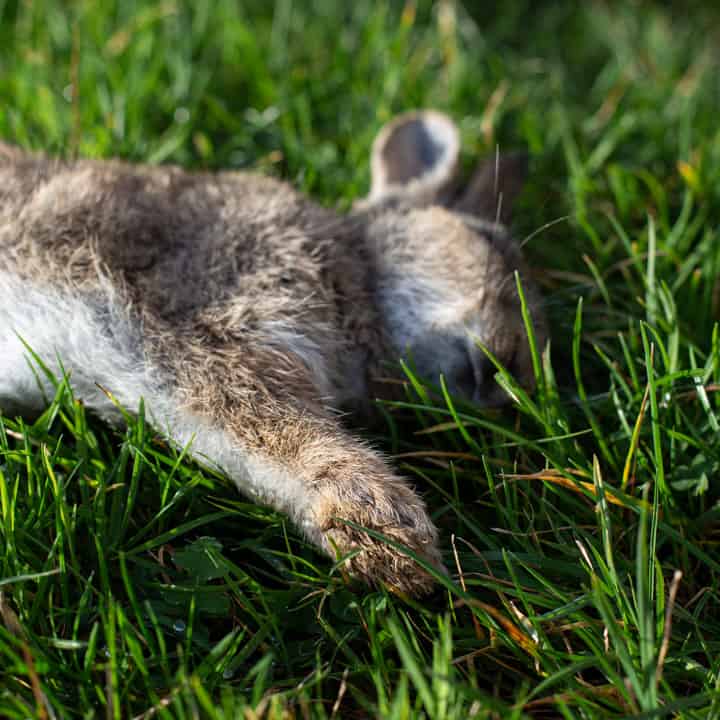 Huge thanks to my friend Mike for dropping round this bunny!

In fact, most farmers in my area consider rabbits to be vermin and welcome an experienced shooter to help clear them from their land.

If you are lucky enough to have access to freshly shot wild rabbits, I urge you to give this recipe a go.

A quick side note: please avoid buying farmed rabbit unless the welfare can be guaranteed. The vast majority of farmed rabbits are kept in tiny wire cages for their entire lives. Even the floor they stand on is made of wire so that all their waste drops through the floor making less work for the human involved in their ‘care’. This is barbaric, and not a style of meat production that should be allowed or supported.

Preparing a Rabbit for Cooking

If your local butcher sells prepared rabbits then you can skip this bit.

A freshly shot rabbit will usually arrive ‘paunched’. This simply means that the stomach and intestines are removed soon after shooting to prevent the meat spoiling.

The skin, head and feet will also need to be removed which is very quick work for someone that has experience.

If you are new to cooking with wild game, there’s no shame in asking your hunter friend to show you how.

It’s a valuable skill to be able to skin and butcher your own meat. 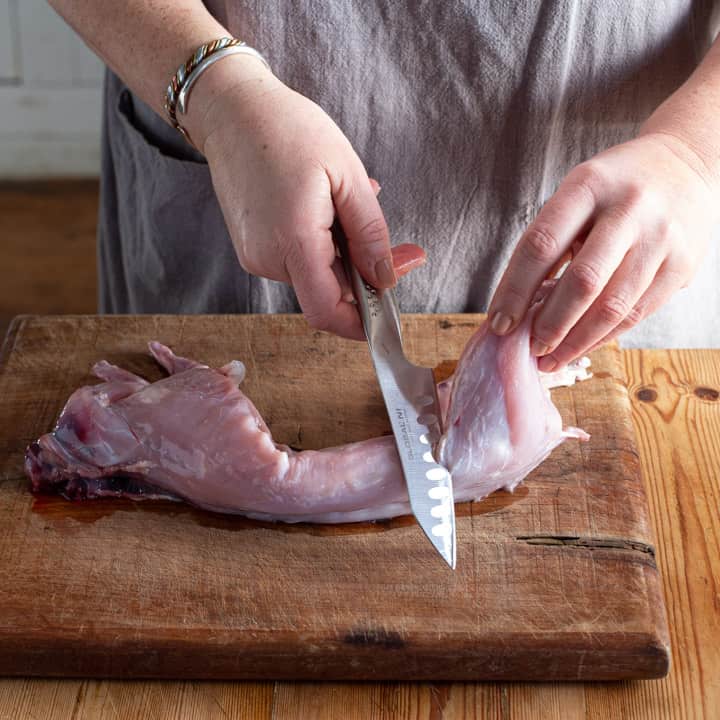 It’s then a case of jointing out the rabbit carcass.

Most of the meat is to be found in the back legs, and the ‘saddle’ which are the two thick bands of meat that run down either side of the spine.

In the pic below, the back legs and saddle are on the left of the board. The spine is top right. And the rib cage and front legs are bottom right. 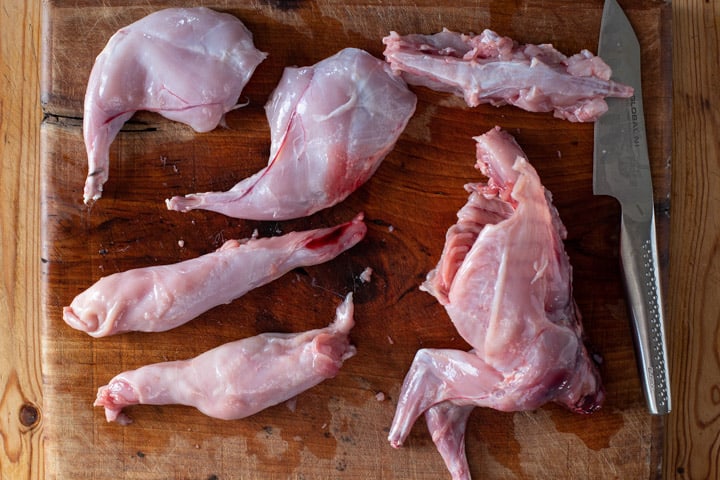 If you have just one wild rabbit to work with for this recipe, you’ll want to add the whole rabbit to the slow cooker.

You’ll then want to pick off and use all the meat you can from the rest of the carcass too.

But, if you have several rabbits and want to work quickly, you can just use the back legs and saddles from 2 or 3 bunnies.

It’s also worth noting that if the rabbit was shot, there will likely be a lead pellet still in the carcass.

You’ll want to remove this to prevent anyone biting down on it and possibly breaking a tooth!

Don’t forget, not all wild rabbits are shot.

If there was no blood or bruising on the carcass, it could be that the rabbit was caught using ferrets and nets.

In this instance, there will be no lead shot, as the hunter will have broken the rabbits neck instead of shooting it.

Why do you put pork in a rabbit rillettes?

As mentioned above, rabbit meat is very lean.

If you omitted the pork entirely you would need to add in fat from another source anyway.

So why not add pork for its fat and flavour!

Traditionally this would have been a very economical recipe to likely use up scraps of a home-reared pig.

The rabbit would have boosted nutrition and bulk for free. 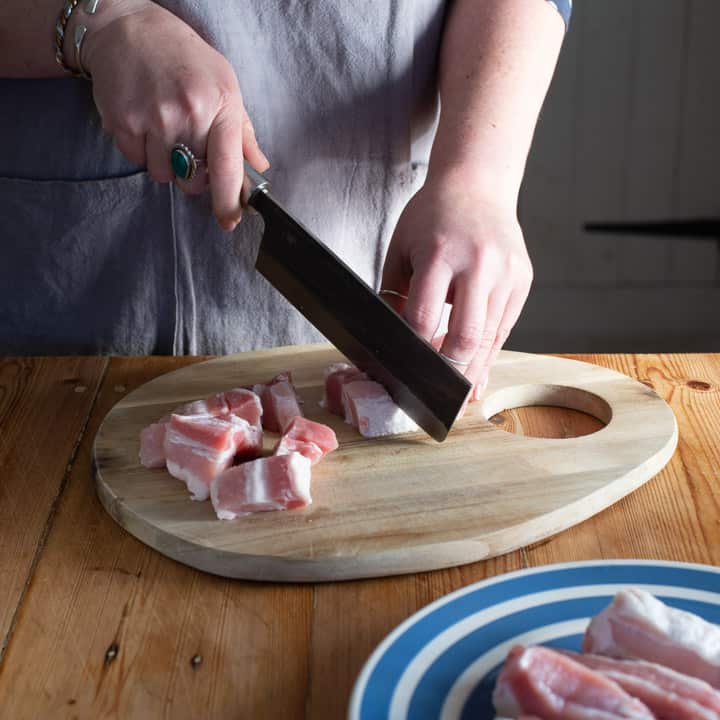 I’m using pork belly which is one of the fattiest cuts.

I dice it up into bite-sized pieces to increase surface area.

As it slow cooks with the rabbit, the fat renders down to help create the tasty, rich jelly.

And as it cools, the fat rises to the top and sets into a protective barrier of fat. 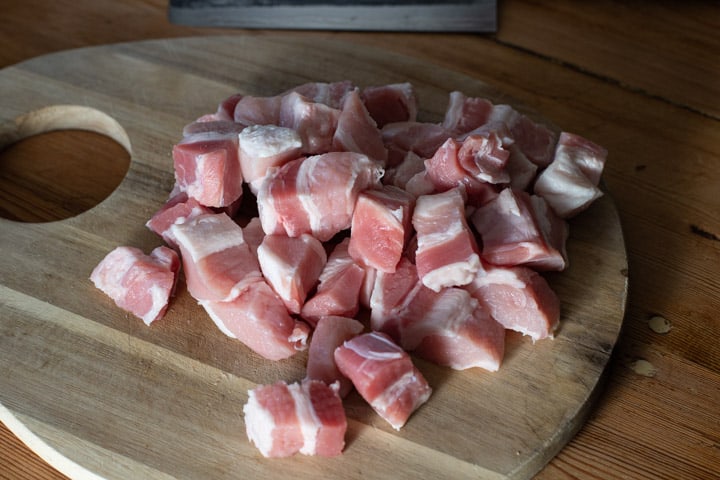 How long does rillettes last for?

As mentioned above, making rillettes was a way that meat could be stored for several months in days gone past.

That said, I have never stored rillettes for longer than a week in my fridge.

Whether you do is entirely up to you, but please research best practice for potting meat safely for longer-term storage.

In theory, so long as your pot or jar was sterile, and all the meat sets safely under the surface layer of fat it should be safe to store somewhere cool and dark long term.

However, as I live on a farm with several farm freezers, I would 100% prefer to freeze any extras jar rather than worry about the risk of food poisoning.

And on that note, yes this will freeze perfectly.

Simply decant into small freezer tubs and freeze. Let defrost overnight in the fridge and it will taste as good as the day it was made. 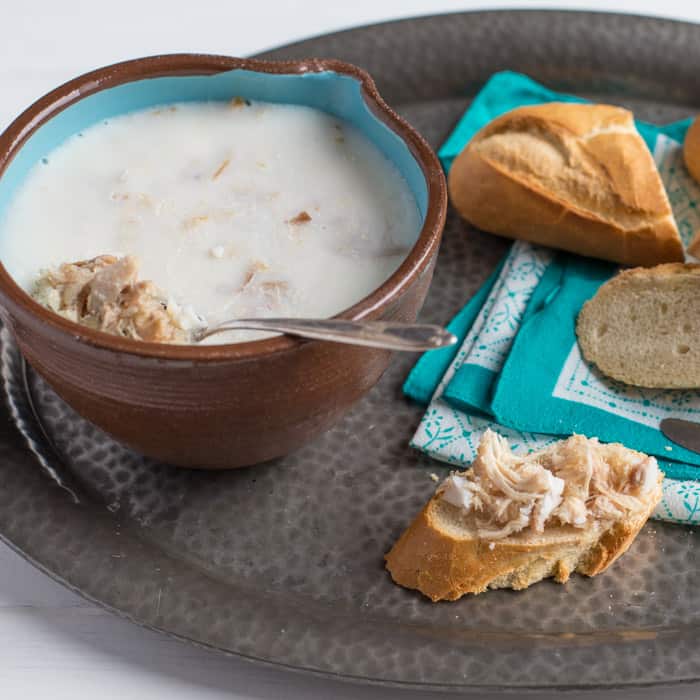 How to Cook Rabbit in a Slow Cooker

I cook the rabbit and the pork together in a slow-cooker.

Slow cooking makes the meat so tender that it literally falls off the bone.

It also helps the fat in the pork to render into a liquid fat which is how you get the layer of white fat on the top of the rillettes.

Don’t worry if you don’t have a slow cooker as I leave guidance below for slow cooking a rabbit in the oven too.

That said, a slow cooker is a fantastic investment if you are exploring the world of game recipes.

It will turn the toughest joint into tender, fully flavoured meat with very little input for you.

And slow cookers are extremely cheap to buy and to run. 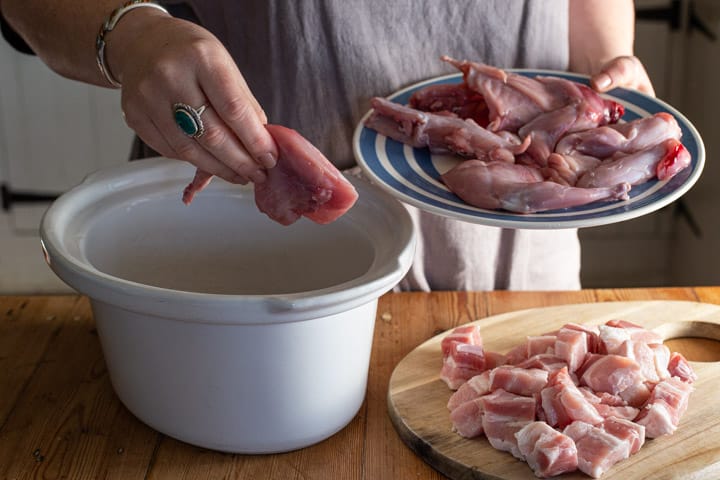 When I add the meat to the slow cooker, I place the rabbit in first and the pork belly on top.

This way, the rabbit cooks in the juices from the pork above and won’t dry out.

You’ll also need to pour in the water and the spices listed out in the full recipe below.

The pork belly I’m using in the pic below is actually quite lean.

If you have more fat on yours, then this is a good thing! 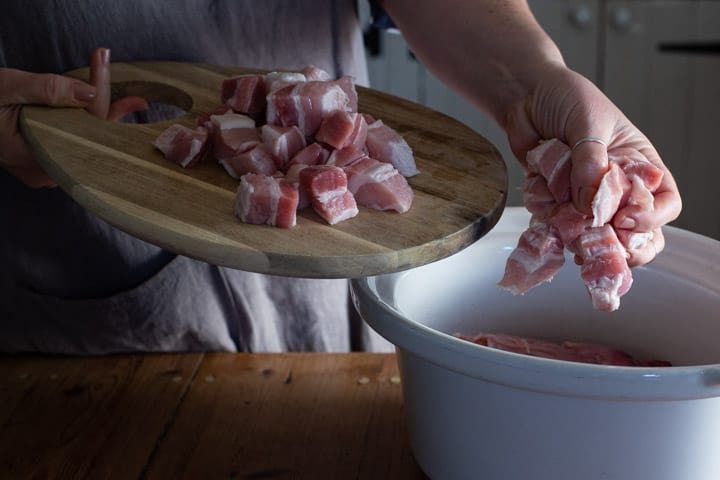 To cook the rabbit and pork it will take around 4 hours on high, or 7 hours on low in a slow cooker or crockpot.

At this point, the pork fat will have rendered and you’ll have so much flavour condensed in the pot. 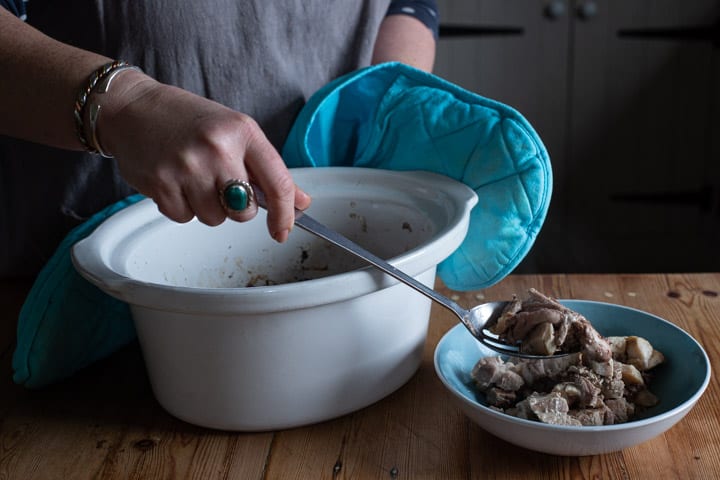 Switch the slow cooker off, and remove all the meat using a slotted spoon.

I put it in a bowl and left it until it was cool enough to handle.

The juices left in the pan can be poured through a sieve into another clean bowl and put to one side. 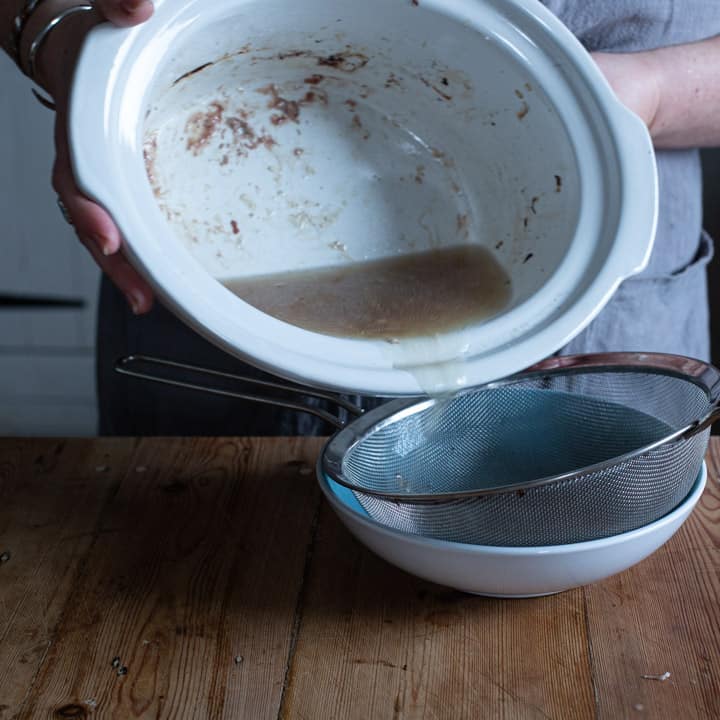 When the meat has cooled a little, pick off and shred as much meat as you can.

Rabbit bones are tiny and plentiful and this bit can take some time.

Next, remove and shred any pork meat into the mix.

It’s entirely up to you how much, if any, of the pork fat you add back in.

Mix this all together well, then pack into sterile jars or bowls.

Finally pour over the juices from the pan.

Be sure to gently push the meat down with the back of a spoon.

This will mean that as the juices cool, the protective layer of fat will solidify and seal the meat under the surface. 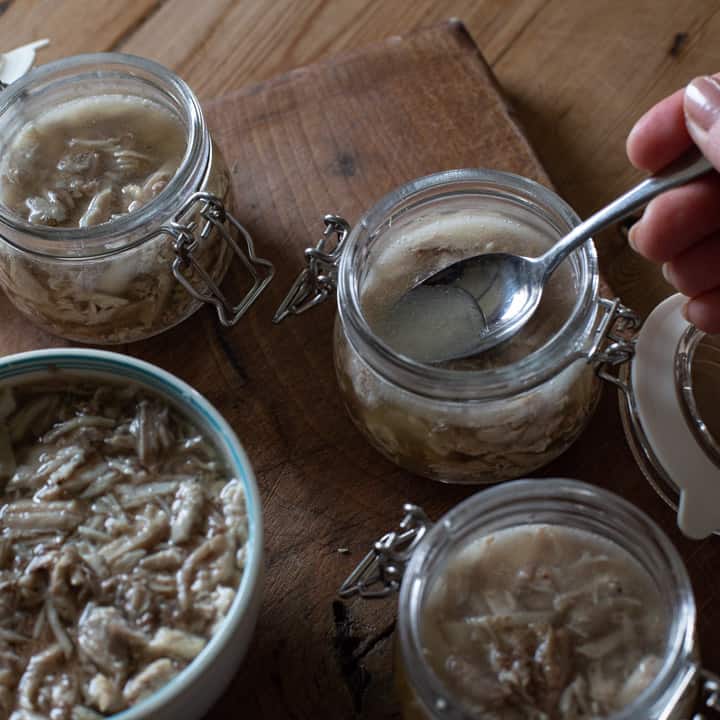 So there you have it!

I do hope you give this traditional rillettes recipe a go next time you are lucky enough to be gifted a wild rabbit.

And if you do give it a go, please tag me in any photos you share online!

You can find me pretty much everywhere as @hedgecomber.

If you fancy some more pâté inspiration, please do go and check out my delicious venison liver pâté recipe. It’s gorgeous, and very popular! 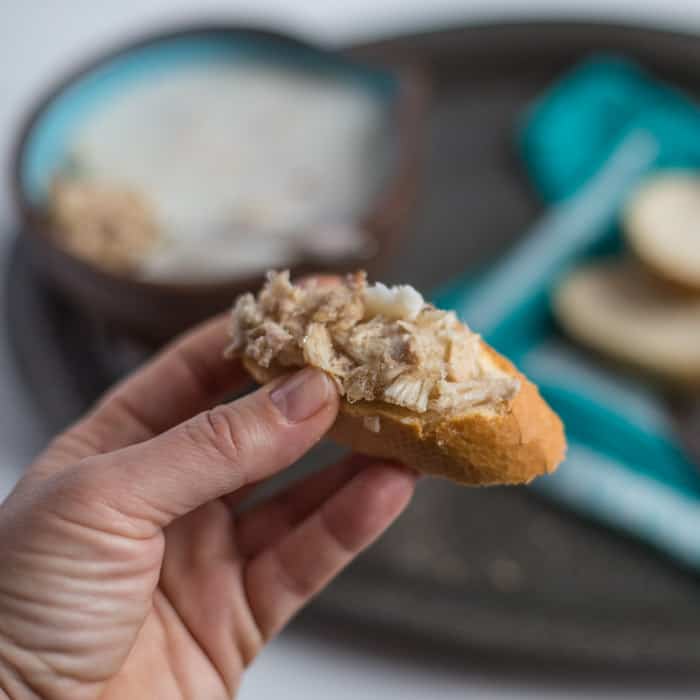 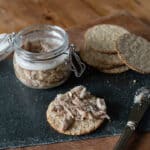