This traditional British Pork Pie recipe is a classic! It’s made with ‘Hot Water Crust Pastry’, filled with chopped, seasoned pork and a strong stock which sets into a savoury jelly. 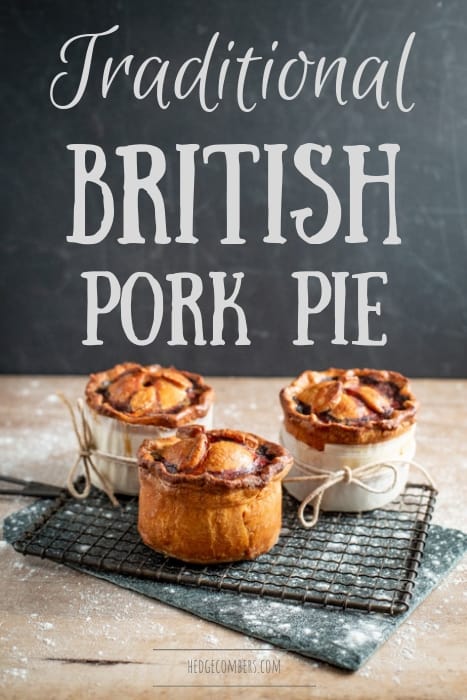 To celebrate I am sharing this traditional British Pork Pie recipe. I truly hope you recreate it in your kitchen too.

It’s worth noting you’ll need to make these pies the day before you want to eat them, as they need to cool overnight in the fridge.

Mostly because my younger self only bought very cheap food. And cheap pork pies are beyond gross.

Along with cheap sellotape, cheap bin bags and cheap aluminium foil. Cheap processed meat products are 100% not worth the saving.

However nowadays, when I happily pay more for meat that I know has lived a life my farmer Dad would’ve been proud of, I have found a whole new world of deliciousness! 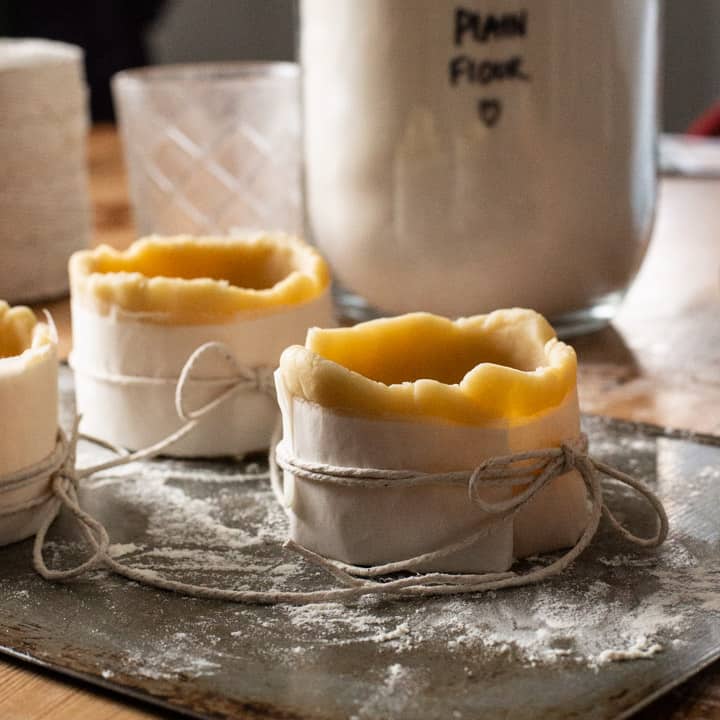 Nowadays they are often served with salads, Branston pickle and perhaps a pickled onion or two.

But I’m quite sure that historically they would have been served alone as an on-the-go lunch food.

They are a robust little pie and travel exceptionally well.

In warmer weather, it would be advised to use an ice pack or two to keep them cool.

But in the winter months, they will fair very well in a regular lunch box. 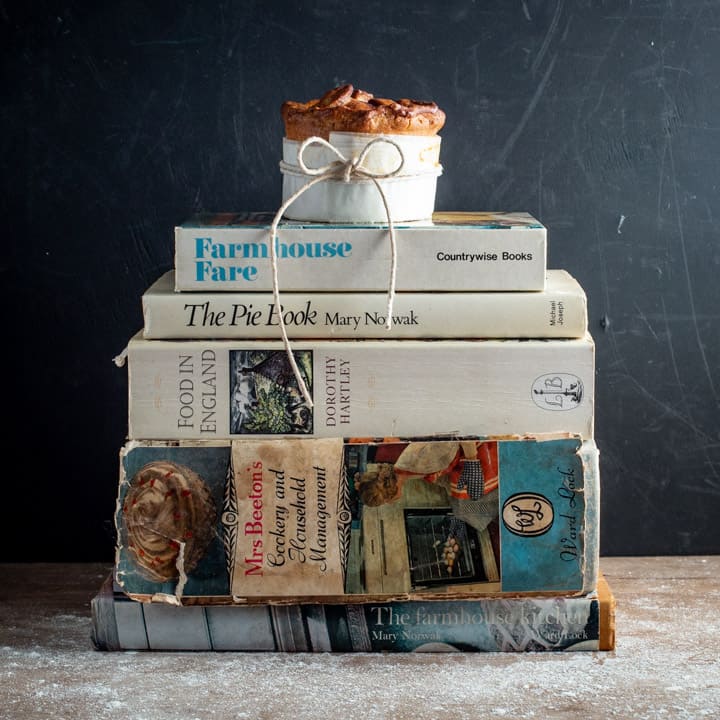 This is the first time I’ve made pork pies, and I wanted to make them the old fashioned way. Pigs trotters n all.

So I devoured my collection of vintage cookbooks for inspiration.

Their recipes varied wildly. So I worked through them all and devised the recipe below.

There are three components to a good pork pie:

Let’s dive into each of those yummy elements…

Hot Water Crust Pastry is not a commonly used recipe in British kitchens these days.

Probably because it does take a little more time, and planning, than regular shortcrust pastry.

However, it’s a fun pastry to work with and tastes so delicious.

You need to keep the pastry dough warm whilst working it, so it remains pliable.

Once the dough had been made, I cut off a section to work with.

The rest was returned to the warm bowl, covered with a clean tea towel and kept away from drafts. 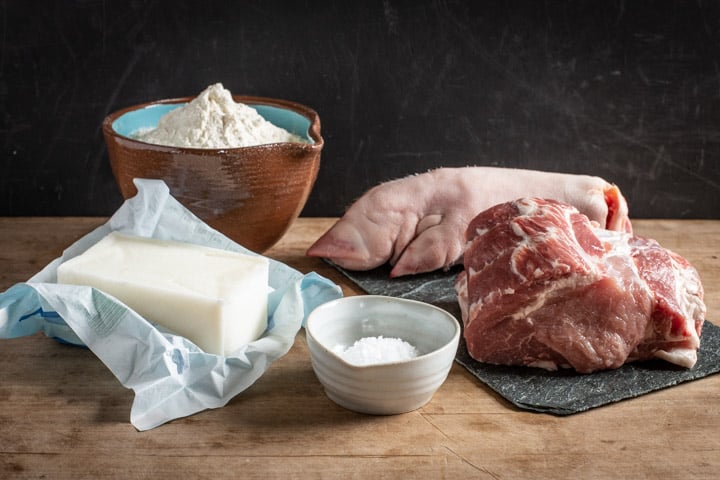 As pork pie pastry bakes, it caramelises into a deep golden brown.

Juices may bubble out of the hole in the top (more about that in a mo) leaving a gorgeous caramelised top.

And the best bit, the base becomes almost crispy with caramelisation.

That is a LOT of caramelisation my friends!

And it all layers up those flavours into a decadent, savoury treat.

After dredging through my cookbook collection, I decided to use pork shoulder for my pork pie filling.

I trimmed all the tough-looking bits off, leaving the softer fat and of course that delicious meat.

That then got diced up really small.

I seasoned it well with dried sage, salt and pepper.

A good massage to blend in the seasoning and it was good to go.

Quick note: don’t season the meat until your pastry is made and ready to fill.

If meat is sat around too long in salt, it draws out the moisture and may make it tough.

As a hand raised pie cooks, the meat inside naturally shrinks.

This leaves you with a gap between that delicious, buttery pastry and the meaty bit in the middle. 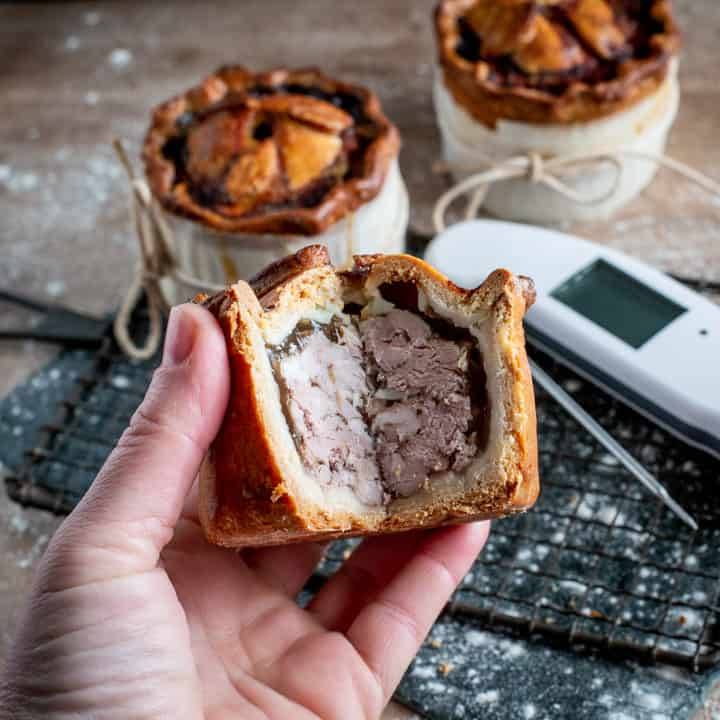 In days gone by, when refrigeration was primitive, that gap could have posed serious health risks.

As there would be a stronger possibility of bacteria getting up to no good and spoiling the meat.

To fill that gap, and add extra nutrition to the pie, a thick stock would be made by boiling up the bones or carcass of the animal used.

The pigs trotter was most often used for this stock as it is so gelatinous.

The stock would be poured into the cooked pie with a funnel and left overnight to set firm.

I know a lot of people freak out about the jelly in a pork pie.

But if it is well seasoned, it is delicious.

And it’s really good for you too. It contains collagen, amino acids, protein, glucosamine and minerals among other things.

Where do I buy Pigs Trotters?

Any good butcher will be delighted to share his pigs trotters with you as they normally get thrown away.

Most butchers give them for free, but the most I’ve ever been charged was £1 for four. So either way, it’s not going to break the bank!

They come clean and in no need of any work.

I generally rinse mine under cold running water and carry on with my recipe. 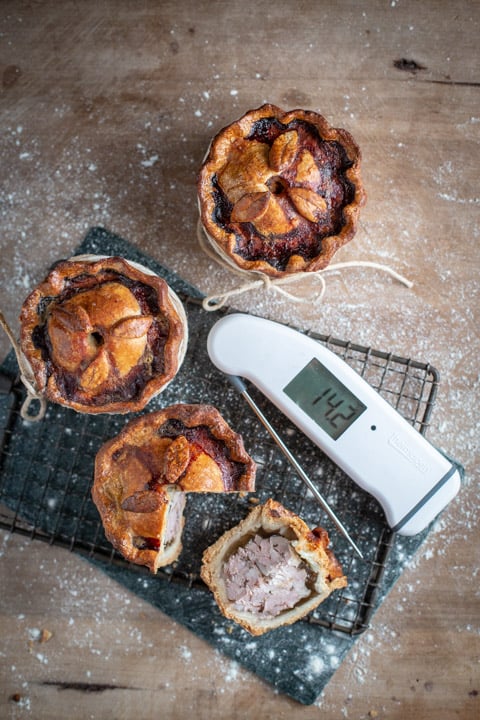 Can you Freeze Pork Pies?

In short, yes! Pork pies can safely be frozen with very little change to taste or texture.

To get the best results, wait until the pork pie has chilled fully in the fridge and the jelly has set firm.

Then simply wrap each pie tightly in cling film or foil. Be sure to add a freezer label or mark with a Sharpie the contents and date and pop them in the freezer.

When you’re ready to eat, simply defrost in the fridge overnight.

The official advice is to defrost and eat within three months of freezing.

Now on to the recipe…

As it’s quite an in depth recipe, I recommend have a good read through first.

And finally, please feel free to tag me in any photos you share online! You can find me pretty much everywhere as @hedgecomber :) 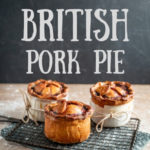 A quick note: Due to the temperature variants involved in making a pork pie (ie cooling a hot pie, to add a warm stock, then cooling to room temp, before refrigerating until cold) it is essential that the pork is fully cooked all the way through.

The easiest way to test this is to poke a digital thermometer probe into the hole you have created for the stock to be poured in. Aim the tip for the centre of the pie (which takes the longest time to cook), and when cooking pork remember that you need to ensure you read a minimum of 65ºC.

At the end of the cooking time when the pastry is golden and the juices are bubbling, expect to see a reading around the high 90’s. Don’t worry though, the meat will still be moist and tender inside that pastry mini oven! 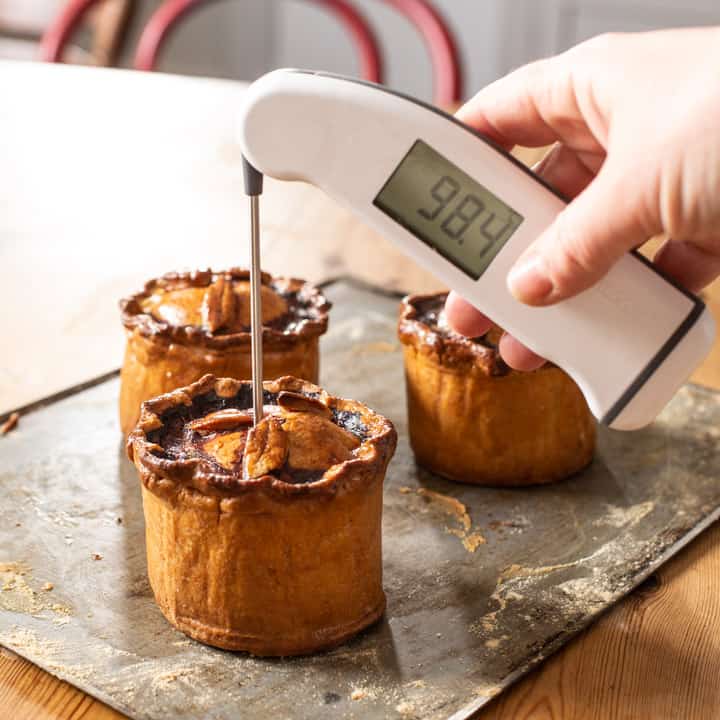 I use a Thermapen Professional which is a piece of kit that every foodie should have on hand.

Happily, they are made in Britain, and they’re a very user-friendly tool. The LCD screen remains off until you open the probe by pulling it away from the body, thereby saving battery life.

The LCD screen also rotates which is particularly handy when precariously testing the temperature of something boiling something like this Sloe and Blackberry Hedgerow Jam! This also makes it perfect for left or right-handers too. 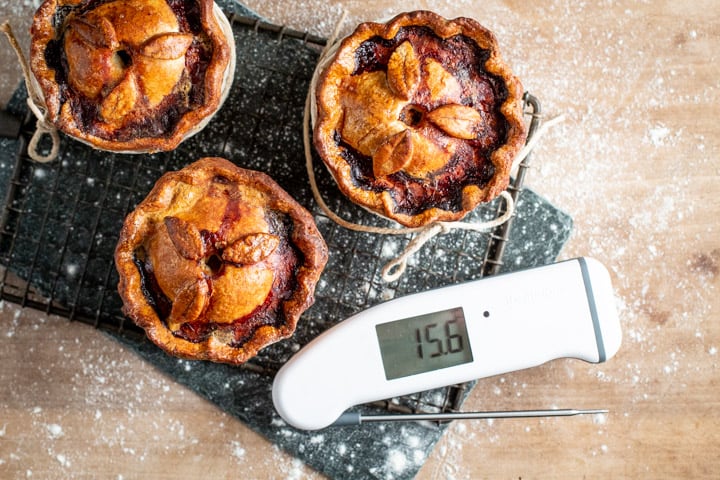 Huge thanks to Thermapen for inspiring this delicious bake to celebrate British Pie Week. As always all thoughts, and leftovers, are my own.