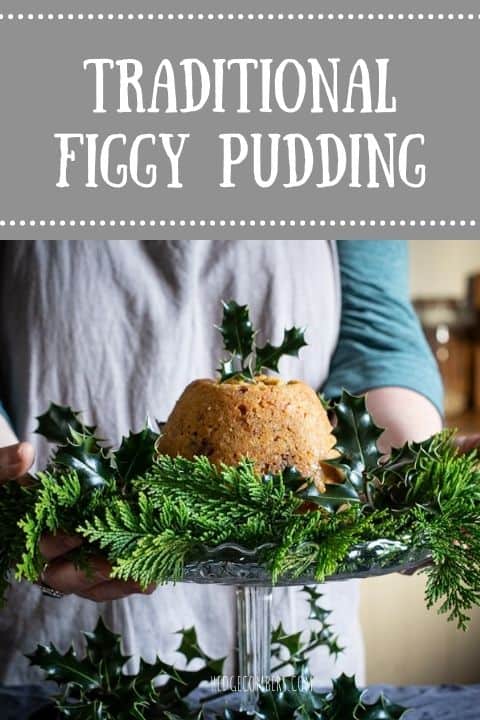 This recipe was originally written in 2015 & has been updated today.

As a food writer and recipe creator, many people ask me where I get my inspiration for the recipes I produce.

So, picture the scene if you will. There I was one Thursday evening, sat in front of the fire, cat on my lap, reading Mrs Beeton’s ‘Cookery & Household Management’. 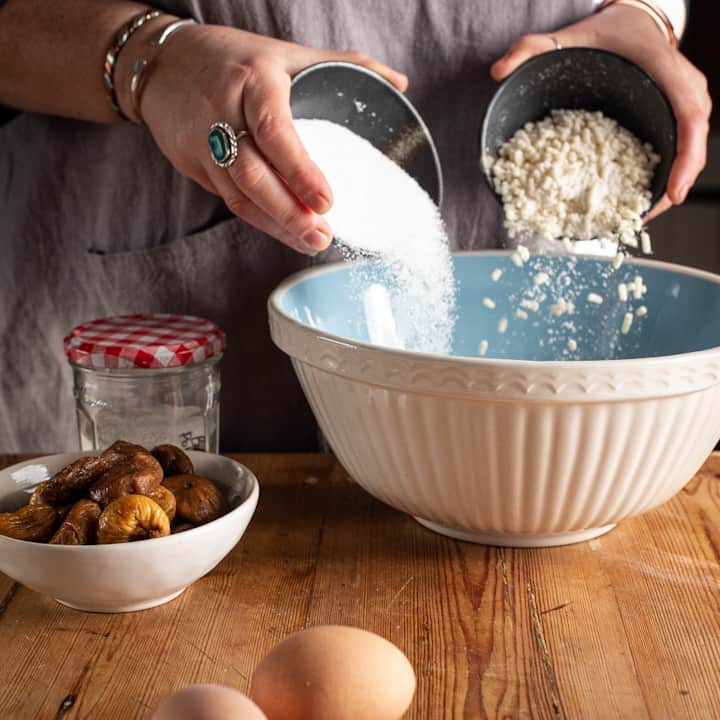 Some might consider it to be a bit of a dry read.

I personally couldn’t think of many things I’d rather be doing on a chilly Thursday evening. :)

What makes this more surprising, is that my vintage kitchenware habit means that I have at least 5 pudding basins in my kitchen. 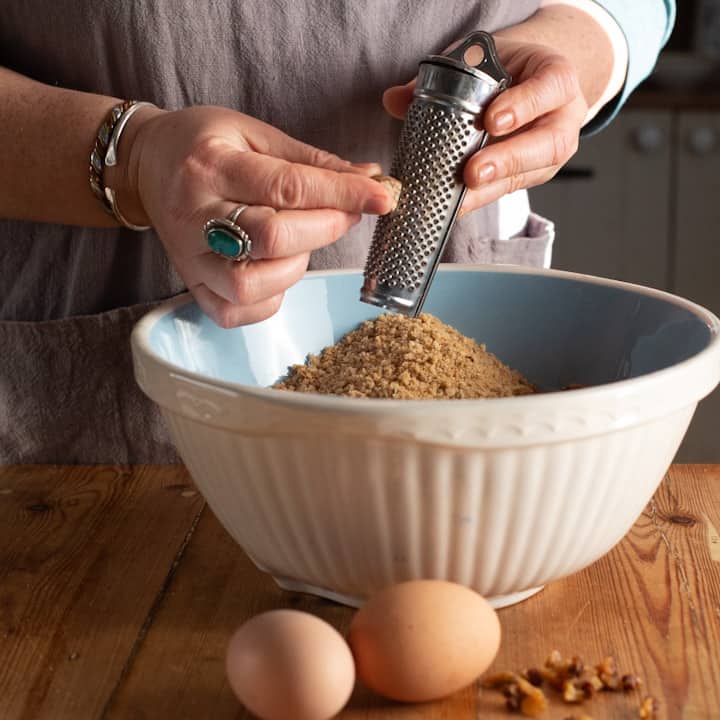 Anyway, buried in Mrs Beeton’s tome was a recipe for a traditional Figgy Pudding.

Other than in the lyrics of a Christmas carol, I’ve never heard of this dish.

The gauntlet was down.

What is figgy pudding?

Well, according to Mrs B, a figgy pudding is NOT the same as a Christmas pudding.

A traditional figgy pudding is an olde English steamed pudding made with suet and dried figs (amongst other things). 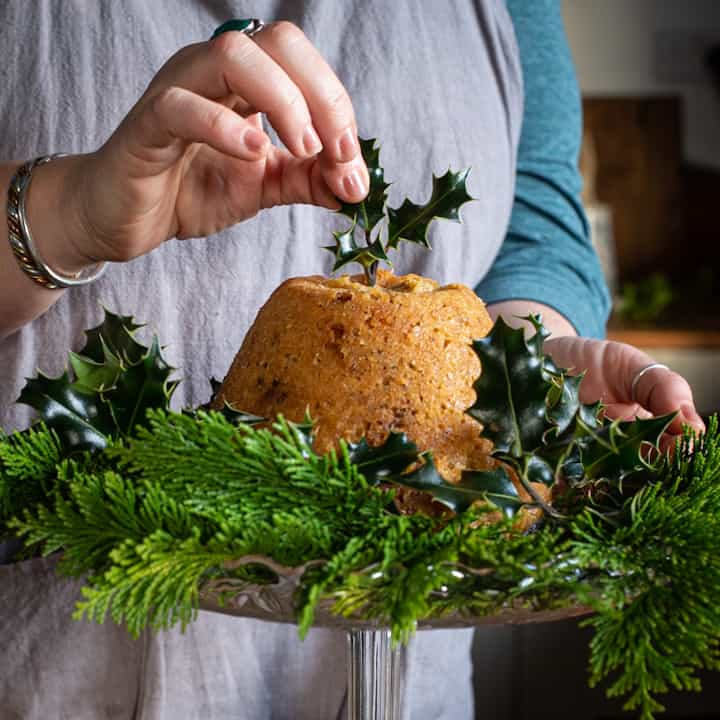 Not only does ‘pudding’ mean the same as ‘dessert’, but it also refers to a specific type of dessert. Usually it’s a heavy filling dessert that’s served warm (and often covered in custard!)

If we take it one step further, a ‘steamed pudding’ is a similar, heavy dessert that’s made in a ceramic pudding basin.

The basin is covered with foil or baking paper, tied with string, then placed in a large pan of simmering water. There is will slowly steam until cooked through, which can take several hours.

A traditional Christmas pudding falls into the category of being a steamed pudding also. 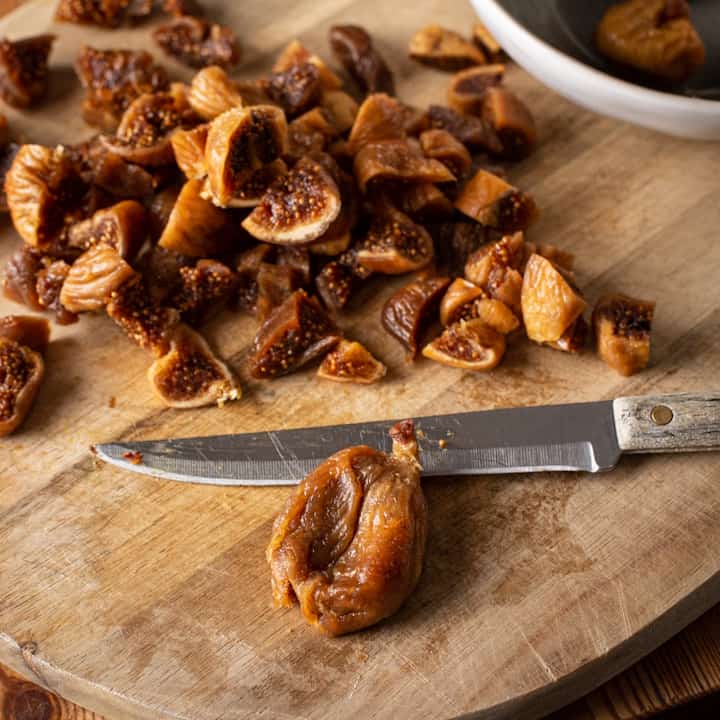 Beef suet in a pudding recipe?

In a lot of traditional English recipes, both sweet and savoury, you’ll see suet as an ingredient. Suet is a fat that is made from the ‘leaf lard’, or the fat surrounding the kidneys of cows and sheep.

In her recipe, the intrepid Mrs Beeton cuts her own suet from an animal carcass. I however took the lazy route and bought a packet of beef suet.

Feel free to use veggie suet if the thought of all this tradition is making you feel faint. 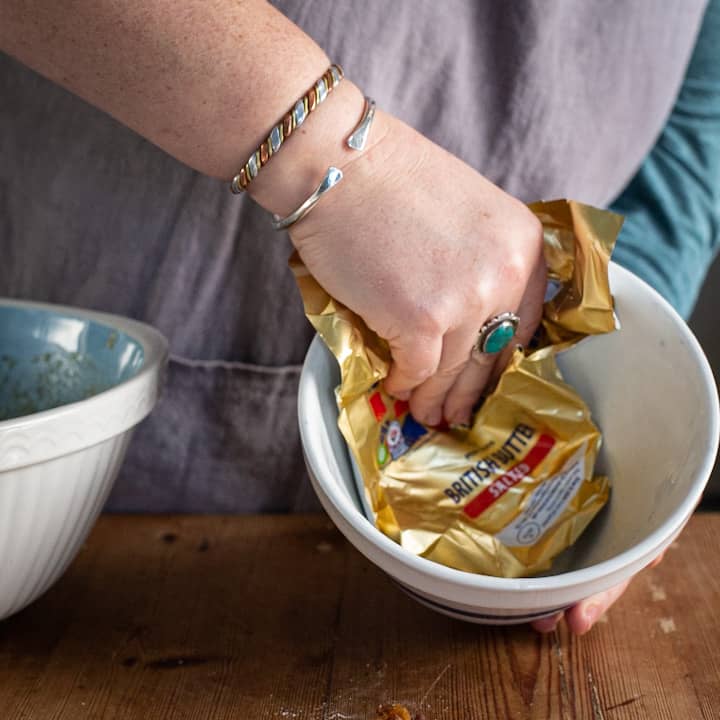 As my pudding cooked, it honestly didn’t smell all that tempting.

It had the aroma of a roast dinner in the making, rather than a dessert.

But thankfully I couldn’t taste the suet in the finished pud. 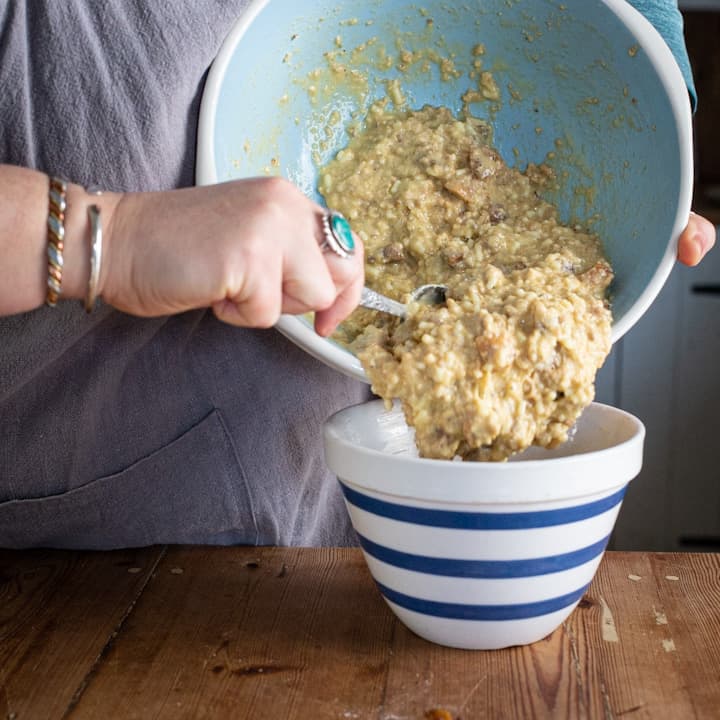 How to Make Traditional Figgy Pudding

This traditional dish is not overtly sweet like a lot of today’s desserts. This means that a jug of custard or a drizzle of warmed golden syrup pairs with it nicely.

It’s a straightforward recipe as you will see from the step by step guide below. 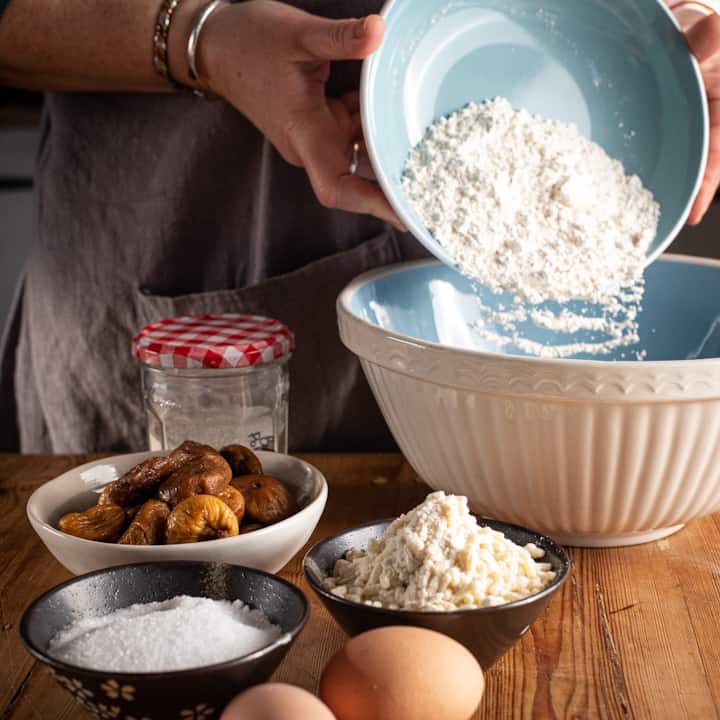 1/ mix together the ingredients

The first part of the method is similar to making muffins. 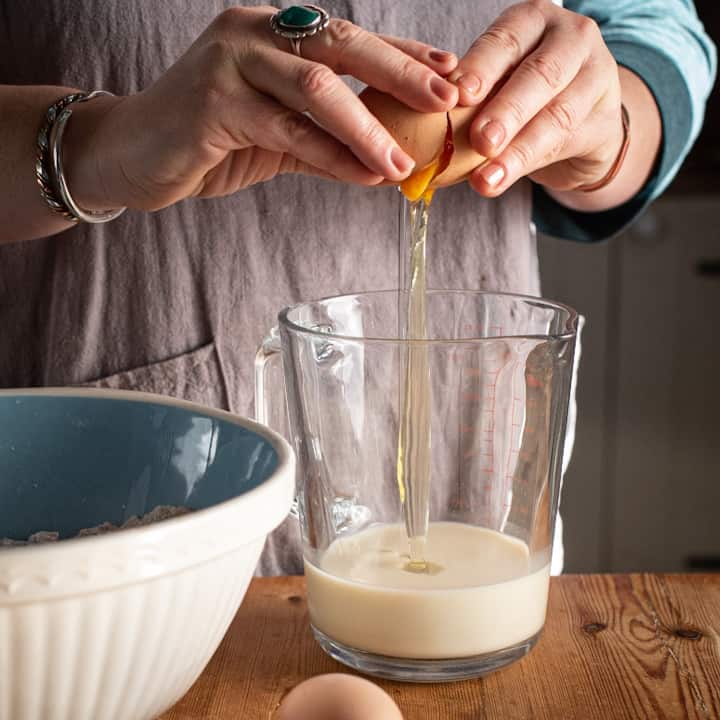 As figs are no longer in season here in the UK at Christmas time, I’m guessing this festive recipe would only ever have been made with dried figs.

I like to cut off the little hard bit at the top of the stalk, and then cut each fig into smaller pieces. 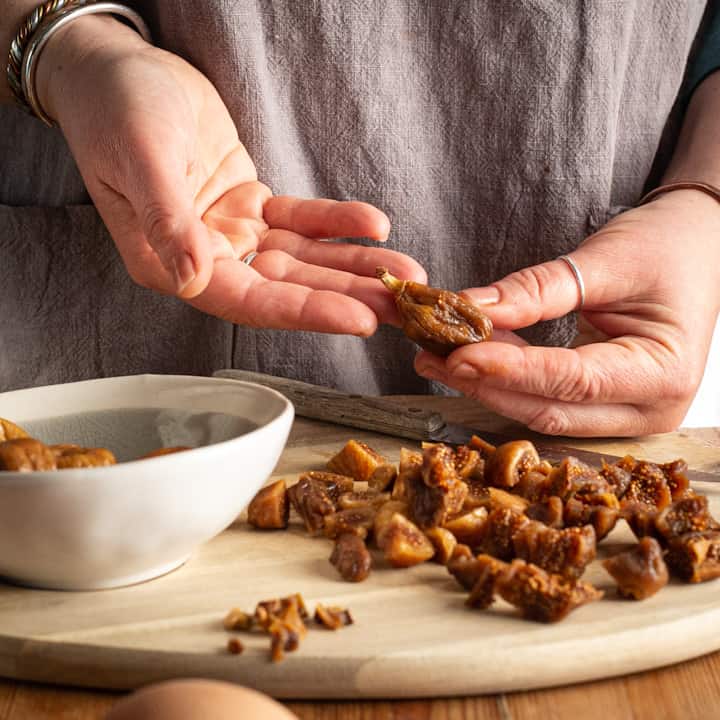 2/ pour into a pudding basin

Take a two pint pudding basin, and smear a little butter around the inside. I used the wrapper from a stick of butter.

Then pour in your batter.

Next, the basin is covered with greaseproof paper and tied with string. 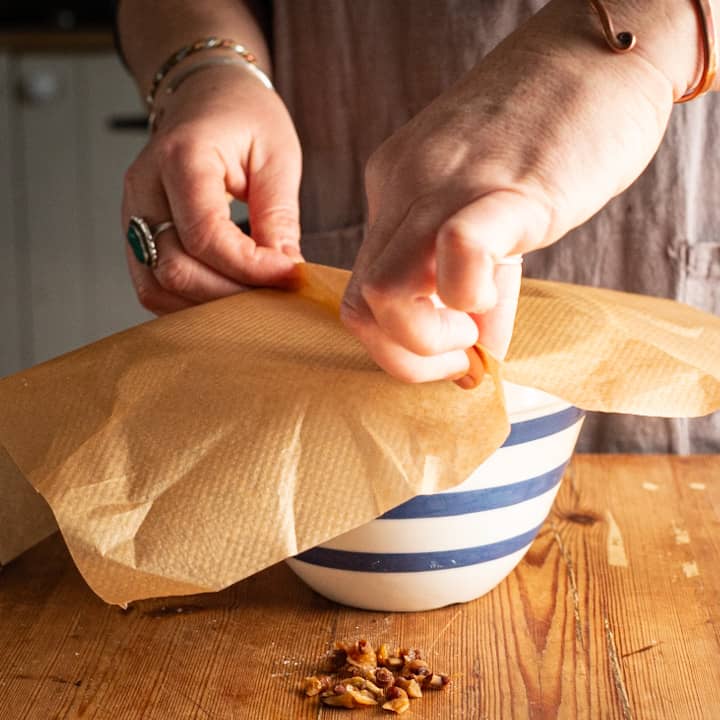 I recommend folding a crease in the baking paper before tying with string so that the pudding has room to rise.

And I also recommend roping in a second pair of hands to tie the string too! 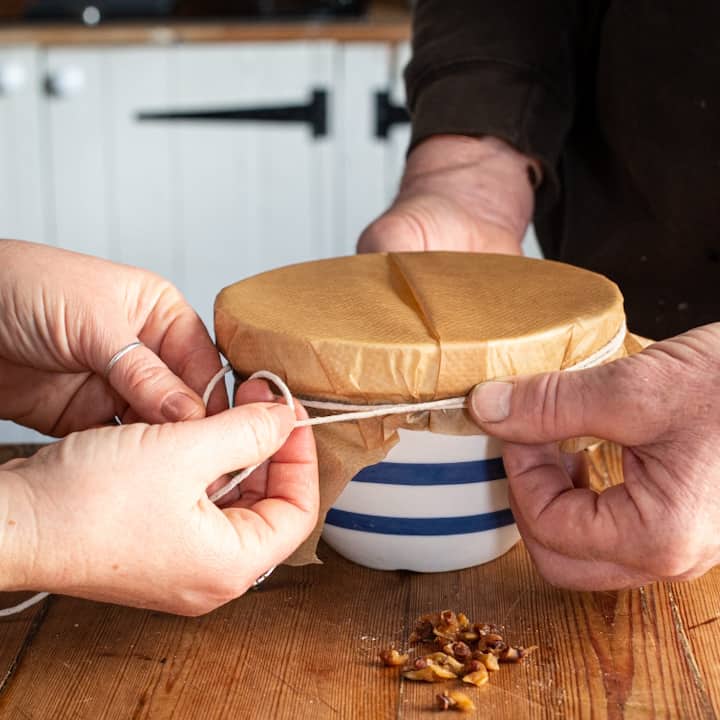 2/ how to steam the pudding

Place a saucer or small plate upside down in the bottom of a large saucepan.

Fill the pan with about 3 inches of boiling water from the kettle. Then carefully lower the pudding into the pan, to sit on top of the saucer. 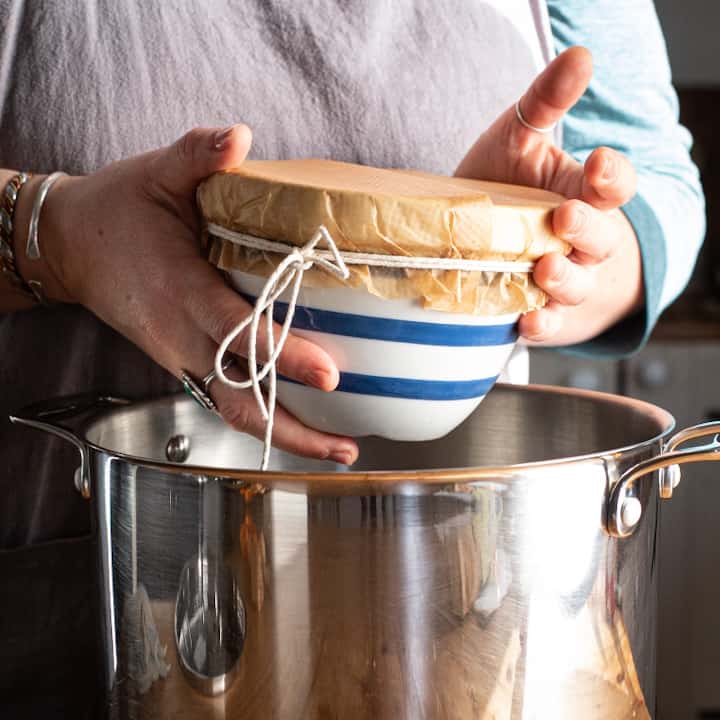 Place on the saucepan lid and let steam for 2.5 hours.

Check occasionally that the water isn’t boiling dry – ideally you want it to come half way up the basin.

3/ plate up the steamed pudding

When the time is up, carefully remove the basin from the pan.

I used oven gloves and placed the hot dish onto a tea towel on my counter top to protect it. 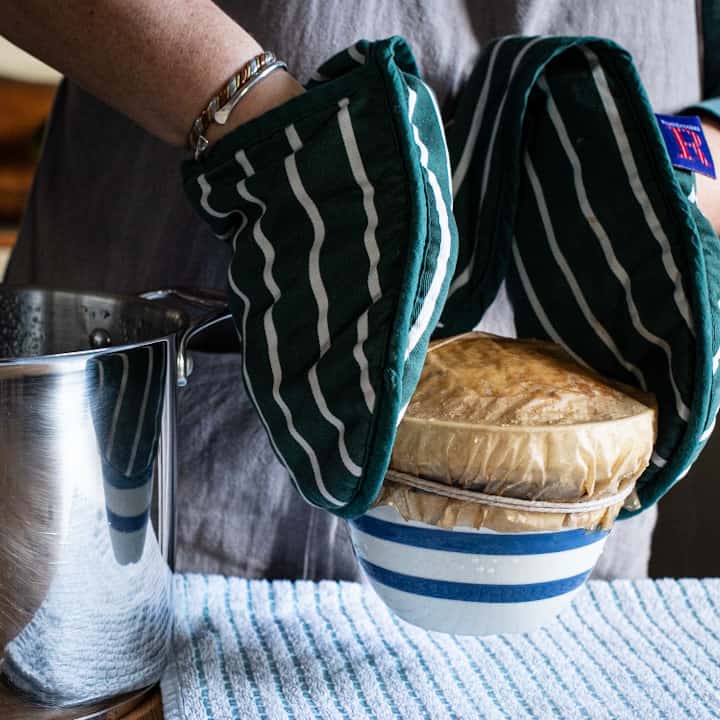 Cut away the pieces of string and remove the baking paper.

When I first tried to turn out the pudding, it wouldn’t budge. Even though I’d been very generous when greasing the dish! 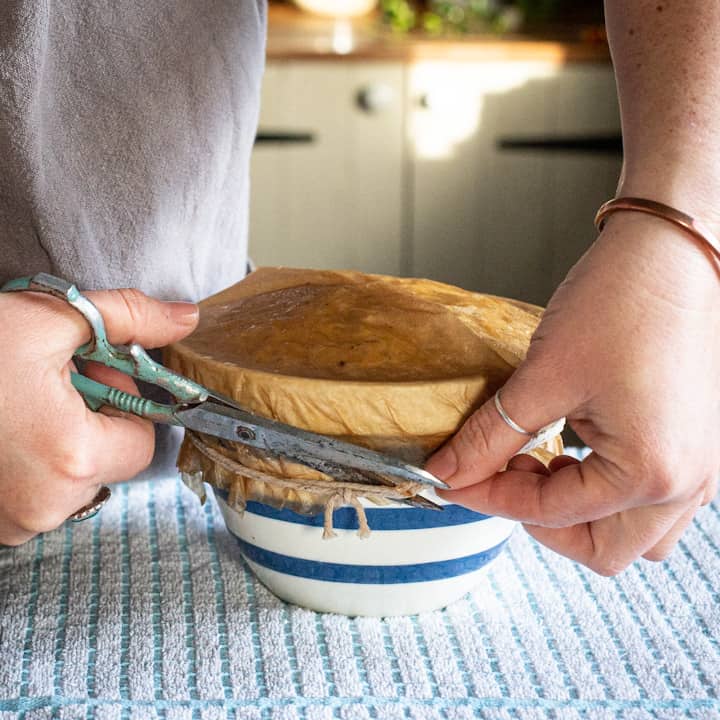 So I ran a blunt knife around the inside of the basin to loosen the pudding.

This worked a treat. 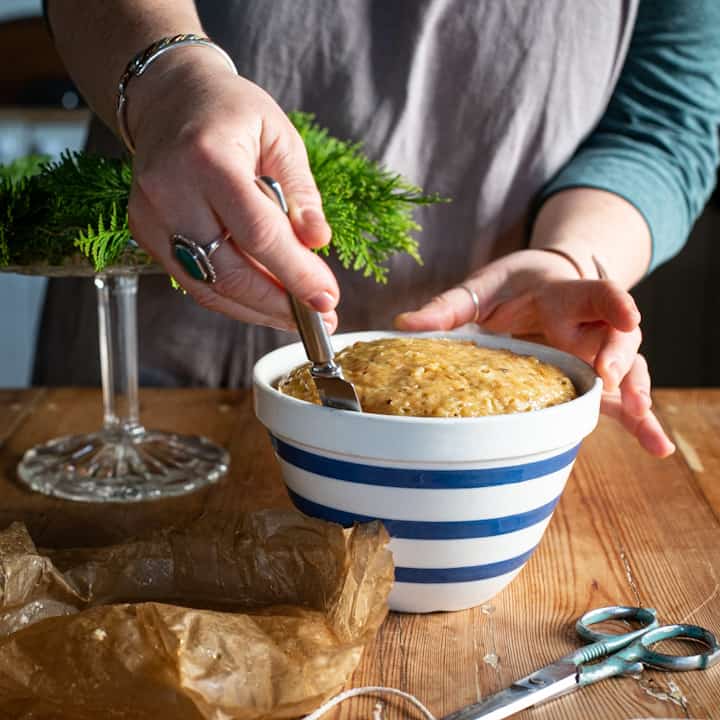 Then turn the pudding out on to a pretty plate or cake stand, being sure to protect your hands from the steam.

I used some freshly picked holly and trimmings from a fir tree here on the farm. 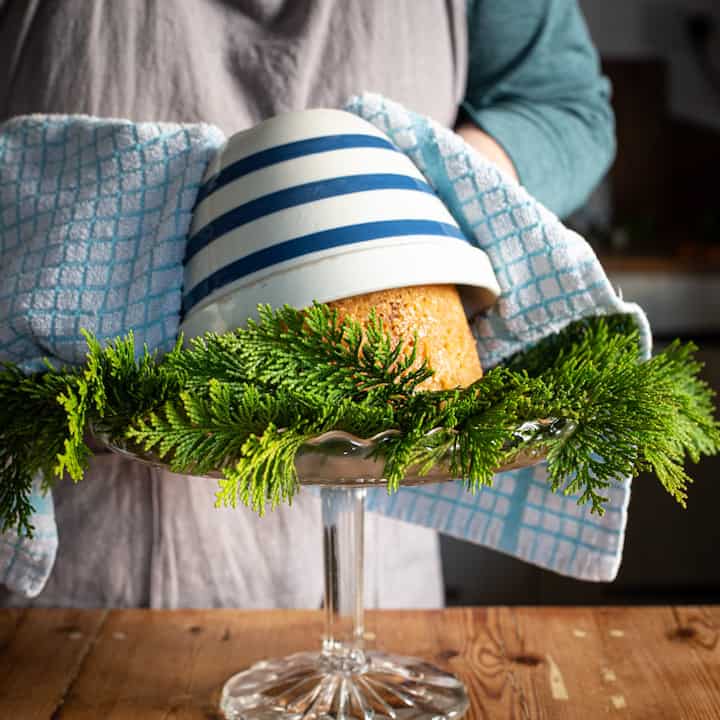 4/ what to serve with figgy pudding?

I would recommend serving your figgy steamed pudding with custard or double cream.

Or, as it’s not an overly sweet dessert, a drizzle of golden syrup would be delicious too. 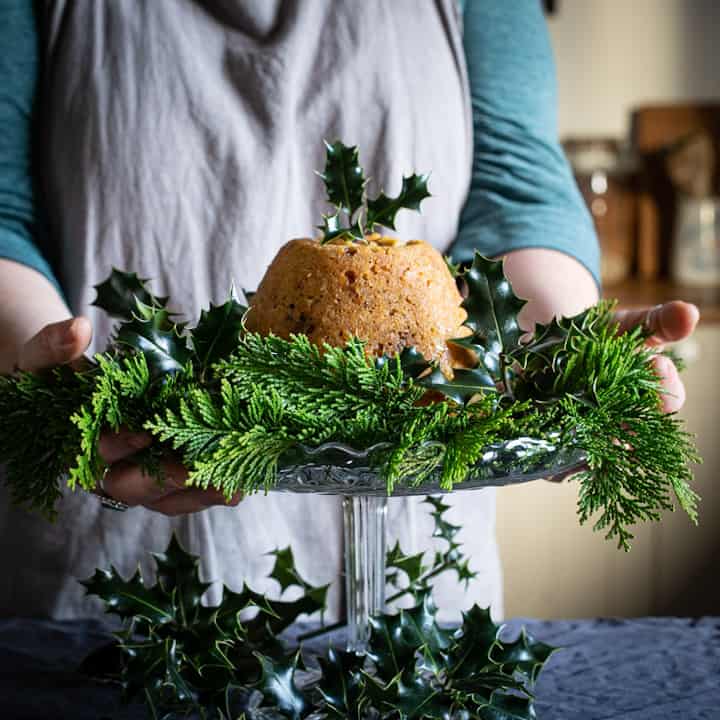 If you give this recipe a go, do feel free to tag me in any photos you share on social!

It gives me such a buzz to see my recipe getting made all around the world! You can find me pretty much everywhere online as @hedgecomber :) 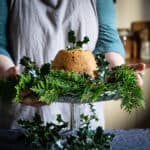