Once in a while I surpass all expectations in the kitchen. Take this dish, Slow Cooker Beef in Red Wine & Mustard. I haven’t been shopping for about 3 weeks. Our cupboards are bare. The fridge recently got cleared out of all the out of date food, and suddenly that was bare too.

From the depths of the freezer I found a small beef joint. Jonny had bought a bag of pickling onions before Christmas with the greatest of intentions, but had never pickled them. And yesterday morning he made the mistake of telling me I could use the last of his red wine as there wasn’t much left. Ahem. 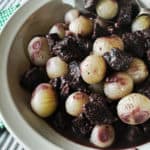