This simple honey and mustard gammon recipe is such an easy way to cook a moist, juicy baked gammon ham.

This recipe is sponsored by Thermapen

Let’s make this year the one!

After the isolation of Christmas 2020, I’m sure I’m not alone in wanting to make this Christmas extra special!

With that in mind I’ve teamed up with Thermapen to bring you a (stress free) traditional ham recipe.

Before we start on the recipe, let’s clear something up. Here in the UK, a gammon is a cured, uncooked pork joint.

Once that gammon joint is cooked, it becomes a ham.

So in this easy recipe I’m using a free range gammon joint that weighs around 2KG in weight. If your joint is a different size, keep reading and I’ll help you adapt the timings to ensure you get a perfectly juicy ham.

There are a few ways to cook a gammon joint.

You can boil it, bake it, or as I’m going to walk you through today, you can boil and then bake it!

If you wish to serve a boiled ham, simply follow the recipe below and remove the joint from the pan of water. Ensure the internal temperature of the meat is at or above 63C (145F) and serve.

The meat will be soft, tender and very moist. But you won’t have any additional flavours of the honey and mustard.

In older cookbooks this would never be an option as the salt used in brines needed to be rinsed off of the meat by boiling the meat first. However, as todays brines are much less salty, you could bake the meat for the entire cooking time.

If you do this, don’t add the honey and mustard until the final 20 minutes or so, as the sugar will likely burn. Be sure not to let the meat dry out if you choose to bake it.

3/ boiling and baking a ham

This is my favourite way to cook a ham. The actual cooking time is done in the water, so the meat is juicy and tender. Once cooked, the ham is then placed into a baking tray, covered with the honey and mustard mix and baked.

This gives you a ham joint that is moist inside, yet sticky and caramelised on the outside. In my mind it’s the best of both worlds, and is an absolute joy to eat!

How to bake a Simple Honey and Mustard Gammon Ham

Place your gammon joint into a very large saucepan. The meat needs to be entirely covered in water, so the deeper the pan the better.

Cover the meat with cold water, then pop on a lid and bring to a boil.

Reduce the heat and simmer for the time specified. My 2KG joint took 2.5 hours.

2/ Prepare your honey and mustard glaze

In a small bowl mix together the honey and mustard.

In the past I’ve used a mix of English and wholegrain mustards for a ham glaze. But you could also use Dijon if you prefer.

When it comes to honey, you’re going to want a runny honey to make blending easier.

My jar of runny honey had become quite hard and crystallised, so I simply left the jar in a bowl of hot water for about 30 minutes and gave it a good stir. This dissolved the crystals and returned it to a nice liquid state again.

3/ prep the joint for the oven

When the cooking time is up, carefully remove the joint from the pan of water. At this point I like to take the internal temperature of the joint to ensure it is fully cooked through.

I simply insert my Thermapen One digital thermometer probe into the centre of the joint and within just 1 second the exact temperature is recorded on the LCD screen.

Pork is cooked and safe to eat at (or above) 63C (145F). If your joint is below this temperature, return to the pan of water and cook for another 30 minutes, then retest.

Next, remove any strings holding the joint together, then carefully cut away the skin from the ham.

I like to leave a layer of fat on the ham as it keeps the joint moist as it bakes. It also soaks up the honey and mustard flavour well, giving you a gently caramelised crust that is just divine.

Using a sharp knife to score the remaining fat into a criss cross pattern will also help the glaze flavour the fat and the meat underneath.

4/ coat your ham in the glaze

This is the fun part!

Pour your honey and mustard glaze over the joint then brush it evenly all over.

I used a silicone basting brush, but a spoon or even your hand would work just as well!

Be sure to cover all sides of the ham with the glaze.

And work it into the score lines in the fat too.

Now you’re ready to bake your ham and add that yummy layer of caramelisation.

It’s worth noting that at this point your ham is already cooked. So the meat only needs to be in the oven long enough to set the glaze, and push the flavours down into the meat.

Pop the joint into the preheated oven, then set your timer for 20 minutes.

Check the joint isn’t burning, then replace in the oven. Turn the baking tray around each time you check as some ovens have hot spots.

Check every 10 minutes thereafter until the ham has taken on the colour you like. Mine was in the oven for a total of 25 minutes, and it was delicious!

When your ham is at the colour you like, remove from the oven and let rest whilst you dish up your sides.

How to adjust timings if your gammon is large or small

Got a question? Drop it in the comments below and I’l try my best to answer it! 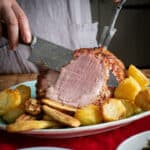