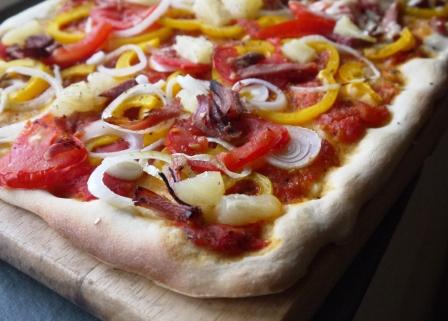 I’ve never made Pizza from scratch before, and I had no idea it would take so long. Overall, I reckon it is worth the effort, but only on a day when there isn’t much else on!

My half had to remain cheese free, sigh, as dairy has become my nemesis. But the pile of veggies, home reared ham, pineapple & sultanas almost made up for it!

The dough recipe I pinched from the Baking Mad site and quite frankly, it can’t be improved upon.

This recipe makes 3 pizzas, which has left my freezer a little fuller and my evenings a little easier this month. 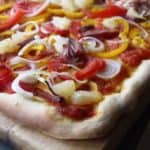