Home » Breeding Mealworms as a Live Food Treat For Your Chickens

This is 3 of the 4 stages a mealworm (Tenebrio molitor) goes through. They are all sat in the bowl of a teaspoon to give you an idea of their size. 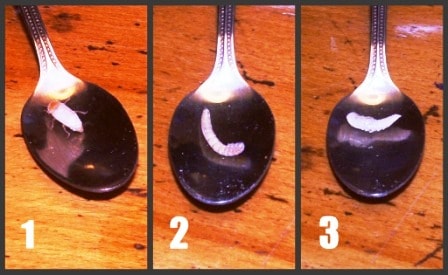 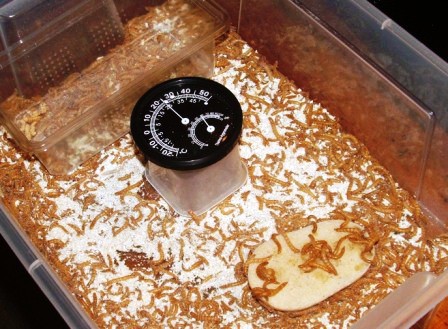 Starting your own meal worm farm

You can find your starter mealworms easily online, or from large or specialist pet shops. Ensure you buy ‘mini’ or ‘standard’ and not ‘giant’ mealworms, as these appear to have been dusted with a hormone powder which makes them grow larger, but renders them infertile. I got mine from Pets at Home, where 120g cost me £6. They had no regular ones left in stock, so I bought the mini ones which are just a younger, smaller version so they took longer to ‘grow up’! I have since seen tubs of them in the store that have already started morphing into pupae, which would save you a few weeks of time in getting them breeding.

Plastic shallow tubs (with smooth sides to stop the larvae or beetles climbing out) with lids are perfect for your worm colony. The lids either need to be left ajar or have air vents cut in them for ventilation.

I would recommend two tubs initially, you can always buy more if you’re planning to start a home business selling them to friends or online. The beetles live and lay eggs in one, the mealworms live in the other. I keep a smaller tub inside the latter to hold the pupae as they don’t eat, drink or move at this stage so need very little room.

I know of a guy who has been breeding them for years and keeps all four stages of his grubs in one tub. This is fine if you just want to pull out the odd treat for your flock or for the wild birds in your garden, however to maximise output you’d be better separating them as the different stages have cannibalistic traits and you will lose some eggs and pupae to the beetles & mealworms. 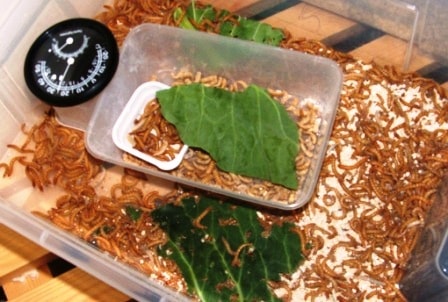 They eat and live in a layer of cereal which is known as the substrate. I currently use oats, but others use bran or other cereals. I grind my oats to make it easier to separate the grubs from the bedding but you don’t need to do this.

They also need moisture, however in my experience this is the trickiest part to get right. Too much moisture will cause the substrate to grow mould and can attract mites, both of which may leave your worm farm doomed. On the flip side, too little moisture makes the shedding of exoskeletons difficult and can cause deformed beetles.

Putting a bowl of water in the tub will just cause the worms to drown, they need moisture in their atmosphere and they enjoy sucking the moisture out of foods.

I have heard of folk using a live insect gel which holds the moisture away from the substrate, but as I’m trying to keep this as simple and as economical as possible, I prefer to find other ways.

A small potato, sliced in half works well. Place it skin side down to stop the substrate getting wet, the worms soon suck the life out of it and drill little caves into it. Cabbage or lettuce leaves, apples, carrots all go down well and occasionally I push the bedding back and pop a couple of cubes of cat food in – not only do the worms love this, apparently it improves their protein levels so you may wish to ‘gut load’ them just before feeding to your hens.

I have found that the potato lasts the longest, it keeps the moisture levels pretty high without going mouldy and only needs changing every other day.

In my experience, they will survive quite happily at room temperature. However, when I bought a temperature & humidity gauge (a couple of quid from ebay) I realised that even with our heating on, the room wasn’t warm enough to promote speedy growing. When they got moved into our airing cupboard, the difference was incredible.

I try to keep the temperature of my worms and beetles between 22 & 28°c. 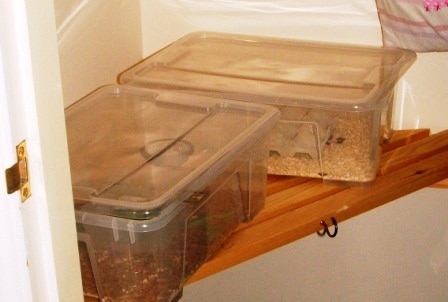 I aim for 70% humidity. It often drops after I’ve taken the lid off to clean them out or if the potato is a couple of days old, but it soon picks up again with the lid back inplace and/or a fresh piece of food.

Out of all the critters I have raised, these guys are the easiest to clean out! They poop out a dry sandy substance known as frass. This collects under the substrate, so it’s just a case of sieving the worms, bedding & frass over a clean bowl/bucket and the frass will sift out. So easy! They don’t generally smell, although you do need to regularly pick out any dead ones (use tweezers) and I sift them out every couple of weeks to avoid any gentle pongs (purely as they live in my airing cupboard!)

When cleaning out the beetles, you need to keep all the substrate for a couple of months as there will (hopefully) be loads of eggs in amongst it.

I hope you are considering starting your own little farm, if only for treats for your hens or wild birds. As always, do let me know how you get on and holler if you have any questions!

* with thanks to Grubco.Com for this info