We’ve just got back from doing the basic survival course down with the Footsteps of Discovery guys in Cornwall. Rocked up on Friday night, slung the hammocks up and met our fellow survivor, Gareth. Had a nice evening round the fire with yarns galore then went to bed. Although not to sleep. Whether it was Jons snoring, the evening coffee, or trepidation of what lay ahead I’m not sure but I couldn’t ruddy sleep.

Eventually Saturday came round and it was a buzz of learning shelter building, knife safety, fire lighting techniques, and a billion other things that I was desperately hoping my brain was storing away as that afternoon we were each placed somewhere in the woods and pretty much left to it.

Happily, being the only girl I was given the kindest environment – a pretty level broadleaf woodland fringed with fern & bracken which make great insulation & rhododendron & laurel which are like mini umbrellas so ideal for weaving into the walls to avert raindrops.

There were loads of thin long logs/tree trunks lying around that I dragged in to build the shelter & fire and several more standing dead trees which were easily pushed over and they were pretty light as they were so dry. After 3 or 4 hours hard graft I ended up with a house that looked something like this… 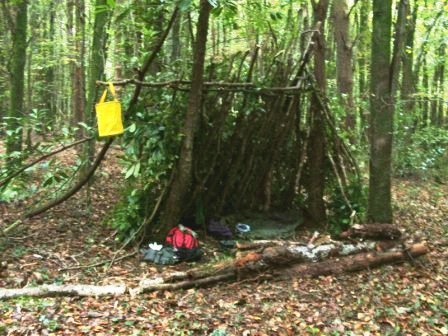 You may just be able to see my green sleeping bag on the floor inside the shelter to give you an idea of the size. The fire skills given earlier in the day meant that the fire was perfect within minutes of being lit and I was set for the night.

Jon was only about 1/4 of a mile away in another broadleaf section of woodland but his trees were much more twisty and gnarled which made it tougher for him all round really. Gareth was placed in a coniferous area which meant it was less open to the elements but much darker and he had to travel further to find the foliage for weather proofing.

Smarty came round at 10pm to make sure all was well and we had a little chat and I was then left to my own devices till he had to wake me at 8 this morning! I slept much better than the first night, and was so warm with all my insulation etc that I decided that to let the fire go out wouldn’t be too much of a crime. It did rain during the early part of the night but I faired pretty well considering.

This morning we were ‘rescued’ at 8ish, fed, led around each others camps to see the pros & cons of each, given a talk on trapping and then allowed to go home. We are knackered! Jons hurt his back sawing trees, my knees feel about 40 years older than the rest of me and that’s saying something as I am aching from top to toe!

Anyways we made it, we survived and are here with big tired grins on our faces to tell the tale.