Although chickens can’t actually fly, they can certainly flap theirs wings energetically enough to clear a fence and cover a distance of 15 foot or so.  A good way to sort this is to follow these 3 Simple Steps to Clipping a Chickens Flight Feathers.

If this likely to become a problem for you (or them) an effective solution is to clip the feathers on one wing which serves to unbalance them, and they quickly lose confidence in even trying. Clipping both wings will defeat the object. 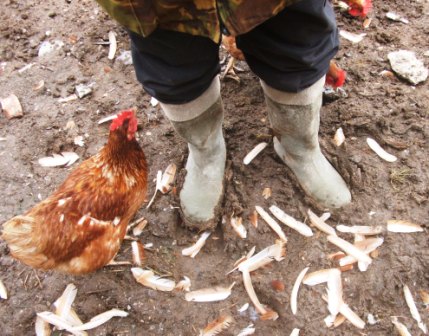 When a chicken moults, she’ll shed each of her flight feathers and grow new ones. When a feather grows, it has a blood supply feeding it which can be seen as a dark, almost black colour within the feather shaft. Avoid cutting through the feather where there is a blood supply, as it will hurt the hen and leave her at risk of infection.

When the shaft of a feather is white and looks hollow, it means the blood supply has receded, it is safe to cut through and the hen won’t feel a thing.

How To Clip a Chicken’s Wing

My hens are all trained to come running to the sound of my voice, so catching them is never a problem. We do however, have a large fishing net hanging in the barn which makes catching new or timid birds much easier.

All you’ll need to clip their wings is a pair of sharp scissors. I’d also advise having another person help you by holding the bird if you haven’t done it before, so you can take your time to understand how the feathers are attached and where is the best place to cut.

Step one; Have your helper hold the chicken sideways, pinning one wing against their chest, leaving you free to get to the other one. If you are clipping an aggressive cockerel, have them hold his head under their arm leaving their hands free to firmly grip his legs. Cockerels have spurs as well as claws and if you have a feisty one, they may well put up a fight. 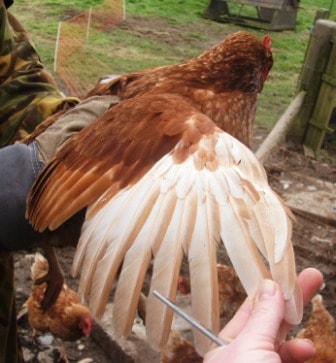 Step two; Gently stretch out the free wing and take a good look at the 10 long, main feathers that make up the wing. Look at the underneath as well, and judge whether the feathers are immature and have a blood supply or are mature and hollow. 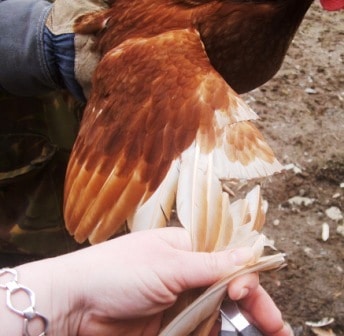 Step three; Using the scissors, snip right down the wing, removing about half of the feather length. Keep checking underneath the wing to make sure you are not going too far in to the bird to avoid cutting her flesh, or too low down the feather shaft. 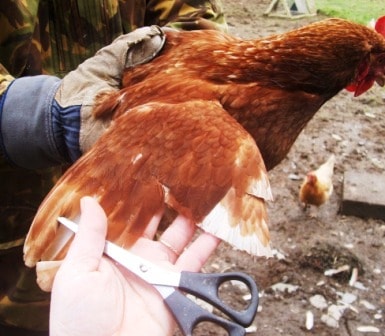 Keep going until all the flight feathers are reduced. It really is that easy!