Slow Cooker Aduki Bean Stew is an an absolute delight. Not only do Aduki beans pack a tasty protein punch in savoury dishes, I only realised whilst researching this blog post that they are responsible for the delightful sweet steamed dumplings I would have for breakfast every day whilst studying acupuncture in China.

I’d stand in line and buy one (or more) of these beauties from an elderly lady steaming them in giant bamboo baskets outside the university dorms. She’d cook them alongside ones filled with meat or vegetables. I never knew what they were called, so would order my daily fix by pointing. It was generally guess work, and sadly sometimes I’d get it wrong and end up with an unknown meat one.

I’d then pine for that sweet sticky red bean dumpling all day long.

Anyway, I digress. Back to the stew. I was kind of surprised to find that this veggie stew tastes better on the second and third day, just like meat stews do. That’s not to say it won’t delight on day 1, but leave those flavours to mingle and get to know each other for 24 hours and I’m convinced it develops a whole ‘nother level of flavour.

And don’t ever let yourself get stuck in a legume shaped slump. There a plenty of other beans you could try in this recipe such as butter beans black eyed beans or even lentils and split peas.

Whatever legume your throw at it, I don’t doubt that this meat mad family will go back to this recipe time and time again. 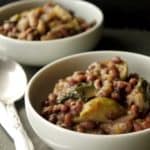